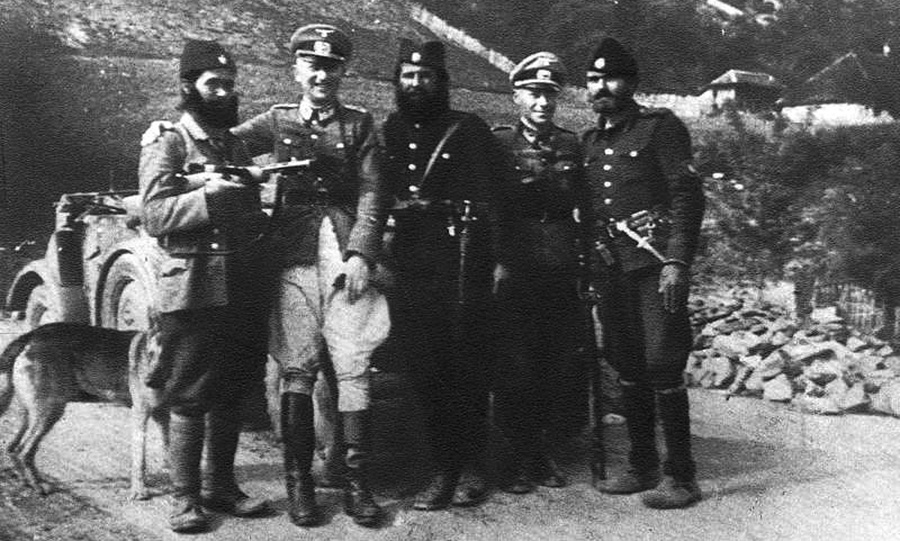 Australia’s Returned and Services League (RSL) is allowing a Nazi-aligned group from WWII and their supporters to march in Anzac Day parades. Meanwhile, the Veteran’s Affairs (VA) Department pays their entitlements out of the public purse at a time when Australian soldiers suffering physical injuries and issues like PTSD find their health benefits being slashed.

The Nazis in question are a WWII Serbian military formation called “Chetniks”, that according to most widely-available histories, including all the various official histories of WWII, were listed at worst as being active Axis collaborators or at the least, a nationalist-chauvinist militia responsible for numerous bestial war crimes.

The reason why we have ceased to supply Draza Mihajlovic [Supreme Chetnik commander] with weapons and support, is a simple one: He has not been fighting the enemy and moreover some of his subordinates have been making accommodations with the enemy. 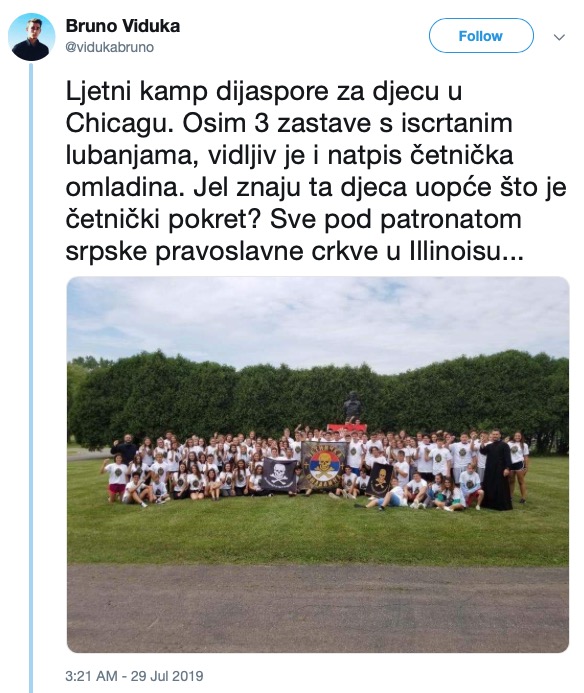 “Some Chetnik Commanders were openly living at German and Italian headquarters. The Chetniks were either not fighting at all or fighting with the Germans against their own countrymen … [the Chetnik’s were] impeding rather than furthering the allied war effort.

Because of his collaboration and other war crimes, Draza Mihajlovic was executed by Yugoslavia in March 1946.  In fact, Chetnik collaboration became so widespread that after the Tehran Conference of 1943, the Allies finally broke off all ties with the Chetniks, eventually even forcing their own political head, King Peter II Karadordjevic to publicly disown them by September 1944 and throw his lot in with Tito’s Communist Partisans.

The Australian government has been well aware of this for decades. For example, the Department of Foreign Affairs and Trade (DFAT) in a letter to an enquiry to a retired New Zealand veteran way back in May 1993 wrote: ‘Serbia was not an ally’ and that ‘it is true that the Chetniks were collaborators’. Despite this, these units march in our major cities every April 25th.

After a follow-up enquiry by the same retired Kiwi Army Sergeant on whether anyone who served in the Chetniks during WWII was “eligible” to receive Veteran’s Affairs entitlements, the response from the Department of Veteran’s Affairs (DVA) also from 1993, was crystal clear:

‘The Chetniks were discredited on 12 September 1944, because of widespread collaboration with the Nazis and Fascists, and because they were fighting on the German and Italian side since 1941.’

Then in a twist that would have made Kafka proud, the same letter went on to say:

‘The DVA has assessed your specific concern under Section 35 of the Veteran’s Entitlements Act 1986. Due to restrictions under the Privacy Act 1988, DVA cannot inform you of the outcome.’

This despite the fact that the VA was only asked if these units ‘were eligible to receive VA entitlements’, and not whether (or not) any living individual was actually receiving them.

During WWII, Chetnik units operating across Bosnia, Croatia and Montenegro found collaboration with Hitler natural as they were already part of Mussolini’s fascist army, the so-called, ‘Anti-Communist Volunteer Militia, a component of the 5th, 6th and 17th Corps of the army of fascist Italy, who according to historians were responsible for the murder of over 50,000 people, mainly innocent civilians.

One of their most revered military leaders, indicted war criminal and Serbian Orthodox priest Momčilo Đujić, who, despite being dead for 20 years, is still the central figurehead under whose symbols many Chetniks in the Anzac Day celebration march and who has from his long-cold grave given inspiration to a new generation of fanatical Nazis, including the likes of alleged NZ mosque shooter Brenton Tarrant and Norwegian mass murderer and neo-Nazi Anders Breivikamong others.

As both a loyal German as well as an Italian ally, in December 1944, Đujić sent an emissary to General Gustav Fehn of the German 264th Infantry Division with the following message:

In response, General Fehn organised the safe transport of Đujić’s wounded Chetniks to the Third Reich, where after the war, he and his followers were employed by the CIA and eventually relocated to the U.S. where Đujić lived out his days. 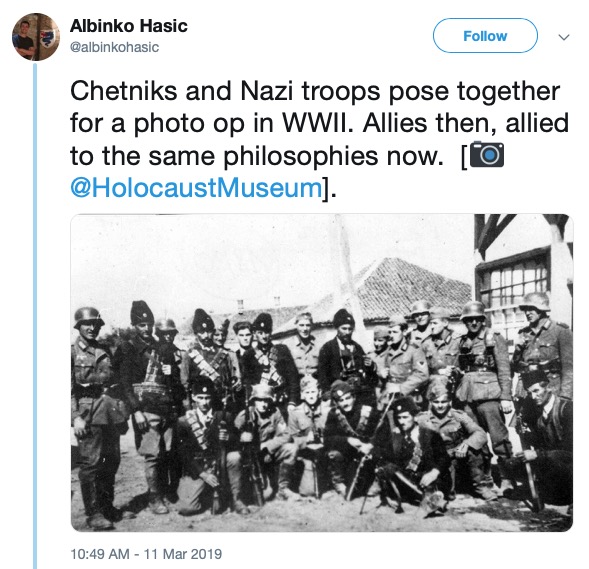 By the end of 1943, the break between the West and the Chetniks was complete. The Chetniks became collaborators and joined the forces fighting the Partisans. There were many instances of Chetniks murdering Jews or handing them over to the Germans.

Fast forward to 2019 and some high-ranking Serbian RSL members have gone on to form alliances with neo-Nazi groups such as Golden Dawn, which was implicated in the Srebrenica Massacre, nationalist Russian Cossacks on ASIO watchlists such as Simeon Boikov and various local far-right extremists like Jim Saleam and Kim Vuga.

Moreover, the leader of the Chetnik Anzac Committee for NSW, Milan Brkljac, along with his brother Draz, a serving NSW policeman, march under the banner of Serbia for Anzac Day, in clear breach of RSL protocols and by-laws, as the RSL does not even have a marching schedule for a country called Serbia, rather only one for Yugoslavia.

As mentioned, this situation has led directly to Chetnik units forming triad-like alliances with groups like the neo-Nazi Golden Dawn and pro-Putin Russian Cossacks, all aided and abetted by well-known figures in the Australian extreme Right, and coordinated by modern-day followers of the Italian and German quisling Momčilo Đujić and their fellow Anzac Day marchers.

Others in this clique have posted pictures of themselves on social media holding “Remove Kebab” signs – a clear reference to, and support of the likes of Tarrant and Breivik, while more disturbing is the fact that some of their supporters have trained and fought alongside pro-Russian forces in eastern Ukraine in breach of Australia’s Foreign Incursions Act 1978.

Of course this circus would be incomplete without the involvement of clueless politicians like NSW Opposition leader Jodie McKay, who allowed herself to be photographed with some of these individuals a few years ago.

Just how the RSL can ignore Nazi collaborators and units from Mussolini’s fascist army tied to local neo-Nazi groups openly marching in Anzac Day parades alongside legitimate veterans, in spite of the overwhelming evidence provided to the heads of the RSL over many years is simply mind-boggling.

Even though their inclusion breaches numerous RSL and Veteran’s Affairs (VA) codes, by-laws and protocols such as provisions of Section 5(c) of the Veterans Entitlements Act which states that an “allied veteran” does not include a person who was “at any time” in a force which was assisting the enemy forces of Australia, the RSL has stayed mute on the subject.

On April 25 2019, in a rare act of common sense, an attempt was made to ban the Chetniks from all Anzac Day activities by the Victorian RSL, however, the branch’s leadership lost its nerve and quickly reversed this decision, allegedly due to legal threats.

While the bureaucratic heads of the VA department and the Veteran’s Affairs minister Darren Chester should resign over this outrage, for its part, the RSL should consider rewording its “Lest We Forget” slogan to “Lest We Remember”.

After all, that would be a far more accurate description of their attitude towards both WWII history and the fate of Australia’s servicemen and women.