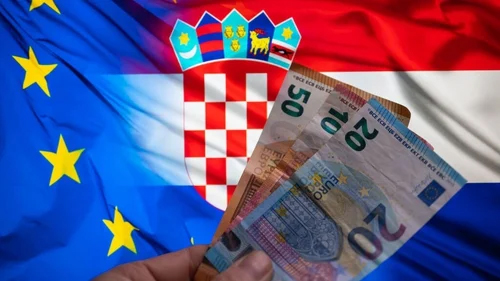 The start of this year brought very big changes for Croatia. To pro-European Union political elites and to quite a few Croat ones the entry into the single currency among 20 other countries and the entry into free travel, no borders zone among 27 other countries are considered a major landmark in Croatia’s modern history. For others it is taken with a pinch of salt and lots of distrust.

Certainly, at the time of Dr Franjo Tudjman’s speech at the inauguration of Croatian Parliament 30 May 1990 the Schengen Zone was very young and the euro not even on the horizon of the EU but Tudjman had put Europeanisation of independent Croatia as one of Croatia’s major goals in its planned exit from communist Yugoslavia. What a paralysing tragedy for Croats who fought for independence from communism to know that the European Union Parliament had over a decade ago condemned all totalitarian regimes, including communism, and the Croatian governments since his death in late 1999 not only have not in effect condemned communism but in practice glorify it more and more including its mass murderer Josip Broz Tito!

Schengen Zone and the Euro – a perfect match?

Some say this is a great thing for Croatia, some say it spells a catastrophe for self-determination and a thousand-year proud identity. It is, however, most disappointing that Prime Minister Andrej Plenkovic did not in any way, shape or form express the country’s gratitude to all (not just HDZ Party ones) Croatian Homeland War veterans and activists who fought for Croatia in 1990’s, its exit from communist Yugoslavia, its self-determination, paving the way for its European existence with blood, sweat and tears.

January 1, 2023, marked Croatia’s shedding of its kuna currency and the shedding of its sovereign borders in favour of the euro and Schengen Zone. Some say this is a great thing for Croatia, some say it spells a catastrophe for self-determination and a thousand-year proud identity. It is, however, most disappointing that Prime Minister Andrej Plenkovic did not in any way, shape or form express the country’s gratitude to all (not just HDZ Party ones) Croatian Homeland War veterans and activists who fought for Croatia in 1990’s, its exit from communist Yugoslavia, its self-determination, paving the way for its European existence with blood, sweat and tears. Andrej Plenkovic’s government continues its coalition with the Serb political minority that was either through direct family lines or political allegiance part of the aggression against Croatia in 1990’s; his government almost does not even acknowledge the part of Serb minority in Croatia that fought shoulder to shoulder with Croats to defend Croatia amidst the brutal Serb and Yugoslav Army aggression.

Asked recently about the implications of open borders with Croatia’s neighbours, Plenkovic said:

“People are really thrilled that there are no more border controls on the crossings between Croatia and Slovenia; between Croatia and Hungary. Seventy-three border crossings are now police-free and customs-free. That means people going freely to the west or to the north of Europe. It means less costs, and more tourists coming to Croatia. 82 percent of overnight tourist stays in Croatia are made by people who come from the Schengen area. So this is going to be a huge economic benefit for us.”

Prime Minister Plenkovic and all his government ministers scandalously omitted to mention the rivers of Croatian blood sacrificed by all not just members of his political Party HDZ and the unprecedented harnessing of the Croatian patriotic diaspora in achieving the goal of Europeanisation of Croatia that was so critical from the start of Croatian independence movement from communist Yugoslavia in 1989/1990. Plenkovic said:

Plenkovic did not say that his HDZ Party of today is a mere shadow of what it was when Croats fought for independence, when Croats needed to defend their bare lives from Serb aggression. Independence was a national matter then and Schengen and euro are now – they are not political party matters because they encompass all Croats.

Most activists and fighters have left the Party during the past three decades mostly out of disappointment with the Party’s growing pro-communist Yugoslavia mindset. But hey, 2024 is an election year and Plenkovic is not likely to say anything that would reduce the Party’s chances for re-election.

They omitted to quote relevant parts of Dr Franjo Tudjman’s, First President of modern Croatia, speech at the 30 May 1990, inauguration of Croatian Parliament that afterwards suffered terrible consequences of the genocidal Serb aggression. Franjo Tudjman among many other things said:

“… Allow me to endeavour and put forward, in the briefest of points, some of the most urgent and immediate tasks that stand before the new democratic government of Croatia…Inclusion into Europe and Europeanisation of Croatia. Simultaneous with democratic transformation we need to undertake all necessary steps for Croatia to be included into the European Union as soon as possible. For centuries, Croatia has been a constituent part of the Western European (Mediterranean and Central-European) culture. Even when it did not have a full political state subject status, Croatia was inseparably connected to the Western European civilisation. The contribution to European life several centuries ago as well as through later history by Croatian Latinists bears loud witness to that fact. The return to that cultural tradition must be multilayered. In European integration Croatia must secure its independence and faster progress…”.

Judging from all said from the Croatian government side during the past two weeks regarding the matter of entry into Schengen and adopting the euro one finds it difficult to avoid the ominous and painful feeling that Prime Minister Plenkovic is peddling the idea that his government, his HDZ Party, are singlehandedly responsible for and should be accredited with Croatia’s entry into the Schengen Zone and the adoption of the euro. Yet, he himself and most of his government ministers had avoided fighting to defend Croatia from Serb aggression, avoided fighting to realise the Croatian dream Franjo Tudjman was voicing in parliament on 30 May 1990, most likely covertly if not overtly vying for communist Yugoslavia to survive the 94% Croatian vote to secede, to leave Yugoslavia and turn freely towards Europe as sovereign country.  One finds it difficult also to avoid the feeling that this is so to enable further pandering to the 1990’s rebel Serb associates in his government’s coalition, who fought against such a path for Croatia and killed and ethnically cleansed Croats mercilessly in the effort to try and stop Croatian independence.

Border and customs checks will be removed at the borders between Croatia and other Schengen member states for people crossing the borders by road, rail or water. That is a good thing especially for younger generations as it gives them more opportunities to succeed in life.

All said above the fact remains that being within the Schengen Zone and being a citizen of Croatia, even with dual citizenship, the gates within the zone are wide open, care free, and easy – for travel to or from any of its country members, to live and work. Third country nationals, carrying a non-Schengen country passport, who have not needed a visa to enter Schengen countries will be able to stay for 90 days and for longer stays visas are required. Border and customs checks will be removed at the borders between Croatia and other Schengen member states for people crossing the borders by road, rail or water. Checks at internal air borders will be lifted from 26 March due to the International Air Transport Association’s (IATA) summer/winter schedule.  That is a good thing especially for younger generations as it gives them more opportunities to succeed in life.

With the euro, economy in Croatia has no immediate fix

According to last year’s European Commission survey only 55 percent of Croatians are in favour of the euro, while others fear a potentially increased cost of living; 80% in fact thought price hikes that will accompany the use of euro in Croatia would put a stress on living that will be difficult to bear.

As for economic advantages of Schengen Zone Plenkovic is talking about for Croatia the jury is likely to be out for quite some time in delivering a verdict. Only days into the euro Croatia is faced with unjustified price rises in food, petrol and energy. So much so that the government is setting up a price watchdog with plan to implement sanctions against all those who increase prices of goods and services, disrespecting relevant legislation. Croatian production, for instance, would need to significantly increased in order to benefit from possible easy cross-border trade (the old fashioned export concept). For the time being Croatia’s production of goods has no capacity to benefit from easy cross-border trade because it hasn’t got much to trade with; its agriculture, fishing etc have been severely curbed by European Union quotas since it became member of the EU in 2013. Contrary to what the government is saying it seems that planting into the national mind that Croatia will become rich because it is in Schengen will certainly not become a reality. A country does not become a wealthy country just because it keeps company with rich countries within Schengen! Much needs to change in Croatia’s labour market and productivity before Croatia sees real advantages of this new big market it is a part of; nepotism and corruption must go, at least to high degrees, if Croatia will succeed in this field.

While favouring being a part of the Schengen Zone Croatians have and are exhibiting mixed sentiments towards adopting the euro. According to last year’s European Commission survey only 55 percent of Croatians are in favour of the euro, while others fear a potentially increased cost of living; 80% in fact thought price hikes that will accompany the use of euro in Croatia would put a stress on living that will be difficult to bear.

“We tasked the State Inspectorate, the Tax and Customs Administration to monitor prices on the ground. The goal is to identify those who unjustifiably raised prices. Fines are foreseen for that…Part of businesses have unjustifiably raised the prices. If we observe a further violation of the Government’s regulations, we have a number of mechanisms, from the return of prices to levels prior to introducing the euro to the cancellation of subsidies. I would like to remind you about the subsidised prices of energy for economic entities and more than 1 billion Croatian kuna in subsidies. All competent services receive a large number of complaints from citizens, who we invite to continue sending their complaints about unjustified price increases. We continuously strive to reduce the inflation rate, it is important to avoid irresponsible price increases, which directly reduce purchase power and citizens’ living standard. Businessmen’s responsibility and social solidarity are elements that cannot be bypassed,” said Croatia’s Prime Minister Plenkovic Friday 13 January in response to the price hikes and chaos occurring.

More than 30 percent of shops and service providers in Croatia have raised prices unjustifiably, some up to 43 percent in the lead up to and transition into euro. This gives a most concerning picture as to how poorer the life of ordinary Croats and pensioners may become. Quite soon!