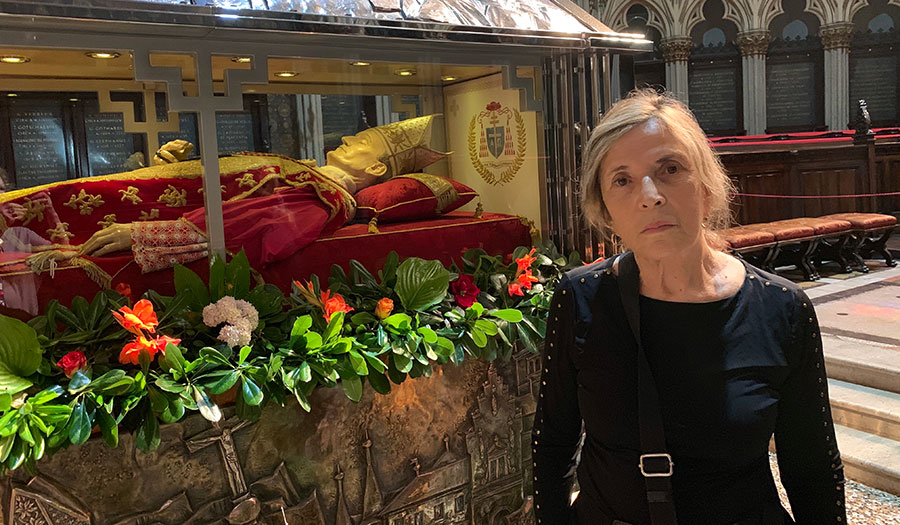 Dr. Gitman: “Yes, many Jews were killed in Ustasha concentration camps, but my mother and I have survived and so did all the other Jews I knew in my childhood. Our survival should be attributed to the help we received from Croatian friends, neighbours, clergy and various humanitarian organisations.”

On Friday 14 June 2019, and upon written submission, including one by Ina Vukic, Vice-President of the Croatian academy of sciences and arts in diaspora and homeland/HAZUDD, the University of Split, Croatia, has awarded Dr. Esther Gitman an Honorary Doctorate for her long standing research and work into the rescue of Jews and members of other ethnic groups during WWII in Croatia led by Blessed Cardinal Alojzije Stepinac, Archbishop of Zagreb during WWII. This, without doubt, brings into focus the exceptional dedication to scientific research into the truth and into the pure good that did prevail, through extraordinary human courage, in historically difficult and challenging times. This Honorary Doctorate bears all the hallmarks of recognising and rewarding scientific research achievements that shine a light upon the very goodness in a soul of a nation, often purposefully obscured by orchestrated falsehoods planted into written history.

The field of scientific research of history to which Dr. Esther Gitman has dedicated her professional pursuits was, according to Dr Gitman’s statements, driven by a determination to research the WWII circumstances in which she as a small child was rescued from Nazi occupied Sarajevo, Bosnia and Herzegovina. The research into WWII history she engaged in from 2002, with its results belongs to those rare, exceptional scientific pursuits whose uniqueness and exceptionality influence the world reputation and interests of the entire Croatian people and nation. It rarely happens in the history of scientific research that such research and its findings actually impact upon and break down the negative stereotypical reputation of a nation, such as the one Croatia and her people have suffered after the Second World War due to intentional suppression of historical details of the truth and forgeries of historical facts, such as the ones Yugoslav communists had concocted against Archbishop Alojzije Stepinac. Dr. Esther Gitman, her scientific research and related works regarding the rescue of Jews, Serbs and Roma during WWII Independent State of Croatia/NDH have achieved that rare and uplifting impact.

Dr. Esther Gitman is a USA based world-renowned scientist who has devoted herself to scientific research on the rescue of Jews within the Independent State of Croatia of the Second World War, especially on the role of Archbishop Alojzije Stepinac in rescuing Jews, Serbs, Roma and all others whose lives because of their ethnicity were, due to political circumstances, in mortal danger during that time. Given that Holocaust research has evolved around the world after the Second World War as one of the most important areas of research for the past and the future of humanity, Dr. Esther Gitman’s scientific work has been raised to a particularly high level precisely because it was innovative. Innovative because her research explored the rescue of Jews and not their extermination as other Holocaust researchers had been doing. By putting the rescue of Jews, not extermination, Gitman’s central theme, at the same time, delivers much of the good truth about WWII Croatia/NDH and many of her people into the righteous light that they deserve. Namely, the negative stereotype imposed upon NDH and its people by those who have written and often falsified history or underrepresented the truth, by those who had persecuted Alojzije Stepinac and branded him as Nazi collaborator and condemned him (1946) to death by life house-imprisonment on the basis of such repugnant falsehoods – can no longer stand! The results of Gitman’s scientific work confirm that during the Second World War within the NDH and Bosnia and Herzegovina thousands of Jews and members of other ethnic groups were saved from the death and suffering by Alojzije Stepinac and many like him.

Blessed Alojzije Stepinac was indeed and as Esther Gitman’s newest book on her research finding says: A Pillar of Human Rights (Title of Gitman’s new book).

Her research on archival material in Croatia and Bosnia and Herzegovina is very significant, and she has studied over 10,000 archive documents. Her research also includes verbal witness testimonies by several Holocaust survivors from the former Yugoslavia, who at the time of verbal accounts’ recordings lived in various countries, eg Croatia, Bosnia and Herzegovina, Serbia, Israel, Canada and the United States America.

The contribution of Dr. Esther Gitman’s scientific research papers is enormous and remarkable, both for the Croatian society and for the whole world. It reaches the depths of truth and human rights struggles in almost impossible but definitely terrible circumstances. The results and illustrations as well as interpretation of her scientific papers do not remain just a letter on paper, they have taken on the effectiveness of shaping true and factual history and the testimony of humanity that characterises a nation.

By historical science’s criteria, Dr. Esther Gitman’s research and related works are of a very high standard and reach to all layers of both Croatian and world society. Through her scientific research Dr. Esther Gitman demonstrates a perfect ability to convey a multitude of individual historical facts revealed in archival material and oral testimonies into a homogeneous whole of human courage in times of violent violations of human rights. And this human courage as laced through Dr Gitman’s work focuses and shines a light on a Croatian man – Blessed Alojzije Stepinac.

Dr. Esther Gitman undertook her scientific work at the time of NDH history’s socially entrenched moral edges and which edges did not have room for any positive moral values that could be attributed to NDH/WWII Independent State Of Croatia anywhere in the world. For example, when Dr Gitman approached the Fulbright Fellowship Foundation for support with her research plan to delve into the rescue of Jews in Croatia and Bosnia and Herzegovina, their reaction was initially one of shock and amazement, and the person interviewing her for the Fulbright Fellowship (which she was subsequently successful in receiving) told her, “Why would you, for goodness sake, want to explore such a topic when the whole world knows what the Ustasha Croats did to Jews and others?”

Dr. Gitman replied: “Yes, many Jews were killed in Ustasha concentration camps, but my mother and I have survived and so did all the other Jews I knew in my childhood. Our survival should be attributed to the help we received from Croatian friends, neighbours, clergy and various humanitarian organisations.”

The reaction to that response from Dr. Gitman was as follows: “An incredible story, I’ve never heard of such a story! Please write a strong submission, ask your professors to review it, then give it to me for a final evaluation.”

On this edge of the overriding general morality attributed to Croats at the time, in early 2000’s, Dr Esther Gitman embarked on her scientific research of factual history.

Looking at the frameworks of the written history of the Second World War and the impact on the prejudices that have evolved over the past decades, Dr. Esther Gitman’s scientific work is remarkable, significant and invaluable for the whole world and for the Croatian society.