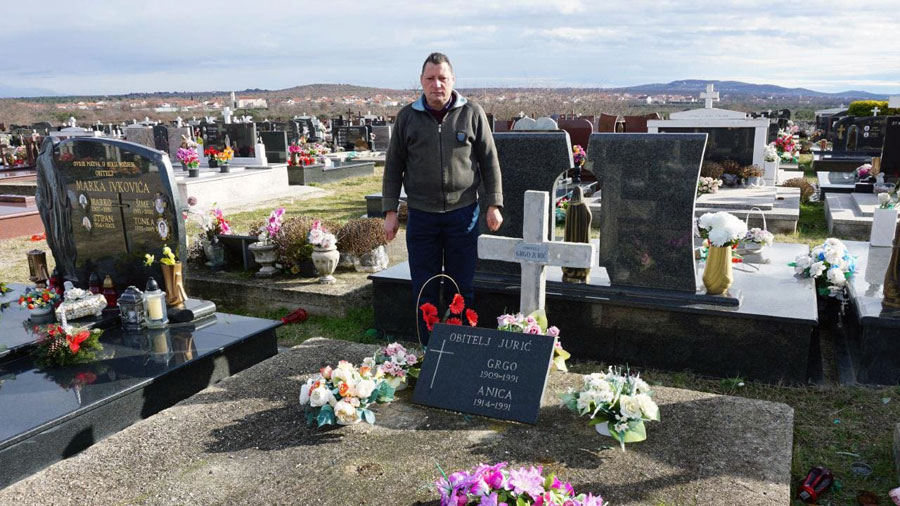 The smells, sounds and sheer terror of November 18, 1991, are seared into Marko Miljanic’s memory.

“It is the day hell arrived in Skabrnja,’’ he says.

In about six hours on that day, Zoran Tadic and his Serbian paramilitary force are alleged to have been involved in the killing of 43 people: 13 soldiers, 10 elderly women and 20 men — one who was 88 years old — in this small rural Croatian village of 450 families, to send a brutal message to all other Croats: flee from your homes and farms or suffer an unspeakable death.

Two of the Skabrnja victims, Grgo Razov, 82, and his wife Anica, 77, were forced out of a basement shelter at gunpoint, hogtied and then rolled together in barbed wire and tethered to a horse — then dragged along the street screaming until they died.

Tadic, at the time aged 32, is the man being sought by Croatian police, who revealed last week he had been charged with war crimes under the Geneva Conventions and was believed to have been living in Sydney for more than 26 years.

Tadic, now 59, is accused of being part of the Serbian push to reclaim a part of Croatia with strong Serbian ties in the territory known as Krajina, where locals were terrorised through torture and mutilation.

For the past two decades, the Croatian war crimes unit knew of this leader, often camouflaged in headwear, and that he was named Zoran Tadic, but working out which one of the thousands of men who have the same name from another country has required painstaking work and a dose of luck.

War crimes investigators believe Tadic entered Australia on August 22, 1992, with the help of the Serbian government, keeping his alleged wartime activities for the Serbs under wraps and then obtaining Australian citizenship.

In Zadar in western Croatia, the chief of the war crimes investigation department, Ivan Gambiraza, and the chief of criminal police, Bore Mrsic, are key players in the push to proceed with what will be one of the country’s biggest war crimes prosecutions.

“There are two big symbols of martyrdom in the homeland war, Vukovar and Skabrnja. Skabrnja is particularly horrible because the slaughter happened in one day,’’ Mr Gambiraza told The Australian.

“The victims’ families can now get some satisfaction and relief at last. Our first priority is to the victims.’’

The investigative breakthrough came about through snippets of information from other war crimes cases and the revelation that a large proportion of the paramilitary group was from a Serbian town called Lozniza, near the border with Bosnia. The police narrowed down the possible Zoran Tadics to several dozen, and discovered that even within the same paramilitary group involved in the Skabrnja massacre, there were several men of the same name. Narrowing the list down has come after a year of further investigation, elimination of suspects and examination of photographs and documents.

But, adds Mr Mrsic, if anyone has any other information and evidence, even in Australia, they are urged to come forward.

Skabrnja resident Slavko Segaric was working in Germany on that horrific November day 27 years ago and lost eight of his family, including his 68-year-old mother, Lucija, and 64-year-old father, Krste, when they were the first residents forced out of one of 15 basements in the town used as sanctuaries.

He stands at the top of the basement steps of the neatly rebuilt house, cocking his arms as if holding a rifle and showing how they were mowed down at short range in quick succession as they emerged. It was a mercy to die instantly, compared with others who were tortured. Take the Miljanic family experience.

Miljanic was a Zadar policeman, tasked with organising the local national guards to help defend his family town.

On the morning of the attack, which was more intense than all the others that preceded it, Miljanic ran a kilometre to the hilltop position over the town to relay developments back to Zadar and co-ordinate his small force of men, all the while listening in on the Serbian radio frequencies.

Miljanic’s mother, Jurka, found her usual refuge below ground, still dressed in her nightwear and slippers. She kissed her husband, Josip, goodbye. He was worried about his animals and slipped away to free his horse from the barn that was under mortar attack. It was 7am on a clear crisp day. Jurka would not see her husband again. As the tanks of the 9th corps Yugoslav army group rolled into town, and the planes started bombing, some residents were captured and forced to walk in front of the tanks.

“The infantry were at the front and the sides and then came the tanks, there were 28 of them,” Miljanic said. “They had caught some of the local villagers and soldiers and made them walk in front of the tanks as human shields as they knew the only weapon we had was an anti-armour bit of kit, a rocket launcher. The village was circled as the attack happened from three different sides and there were plane attacks too.’’

After freeing the horse, Josip ducked into the basement of the Segaric family. When he emerged, paramilitary soldiers tied him with wire and pushed him from house to house, taunting and heavily beating him. Then in front of a group of shocked children they suddenly slit his throat. Miljanic’s brother was also killed.

Jurka, who is now 98 and suffering dementia, wipes away tears as her son recalls those brutal hours.

Jurka and her family and friends were discovered by the paramilitary men and Jurka’s nephew, the local barber, had his ears cut off in front of her before he was shot dead. A cousin was killed too and she was then thrown in front of the tanks to be run over. Other bodies were mutilated, private parts stuffed into their mouths.

Jurka was badly beaten with a rifle by one of the paramilitary members believed to be as young as 14 years old. She, along with a group of other younger women, was taken away to another town. None of the men could bring themselves to reveal what the women endured for two days before they were released.

All the while, paramilitary members taunted Miljanic over the radio, telling him they would do to him what they had done to his father when they found him.

While an air attack took out his radio, Miljanic was unhurt, although others thought he had been killed. Under cover of darkness in the early hours of November 19, he returned to the village and led 300 people through the vineyards towards Zadar and safety. Another 62 people remained in the town under guard. Some would be killed three months later and thrown into a mass grave near the village school.

The Australian has been unable to make contact with Tadic since the charges against him were made public late last week.

Investigators say Tadic was promoted to head of the State Security of the Benkovac Territorial Defence. He also obtained a luxury house, confiscated from a Croatian family in Benkovac, 20km away. Once the Croatian state attorney’s office completes a review of the evidence, the country’s justice department is to make a formal application to Australia for his extradition to Croatia for trial.

The first Australian to be convicted of war crimes was Perth golf instructor Dragan Vasiljkovic, also known as Captain Dragan, who appealed against being sent back to Croatia in a series of landmark court cases. The process dragged on for so long he spent more than nine years in a Sydney detention centre. In 2017 he was convicted of two counts of war crimes and sentenced to 131⁄2 years’ jail.

Another Perth man, Dragan Ergic, has been accused of two of seven murders that occurred in the Croatian village of Ivkovici, but he says, through his lawyer in Croatia, that the police have the wrong man and he denies the charges.