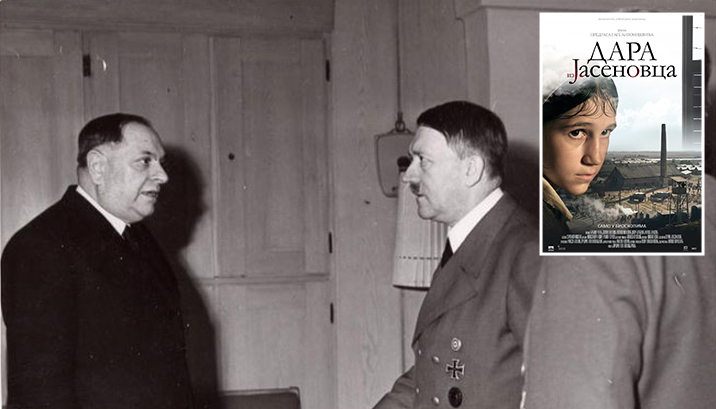 Milan Nedic, Serbian Prime Minister during WWII implemented the Holocaust in Serbia and proclaimed to Adolf Hitler “Serbia is free of Jews” (Judenfrei). “Dara of Jasenovac” is another Serbian movie intended to throw dust into the eyes of the World, regarding WWII Serbian implementation of the Holocaust and proclamation of the first European state outside Germany free of Jews.

In January 2021 released was a Serbian state-funded movie “Dara of Jasenovac” and Serbia had the audacity to even submit the movie as a nomination for 2021 Oscars! It did not, for example, produce a movie by a name such as “Hannah from Cannon Sheds” (Topovske Šupe concentration camp at outskirts of Belgrade). Of course it did not, if it did it would have to produce a film about the extermination of Jews in Serbia.

You may notice how on the topic of WWII Holocaust, Serbia systematically insists that the extermination of Jews (abt 94%) in WWII Serbia was not done by Serbs but by the German occupier. They will tell you that Serbia was occupied by the Nazis (Germany) then – you will not hear them saying that Germany had occupied the entire Yugoslavia (the then Serb-led dictatorship of the crumbled Kingdom of Yugoslavia, which included Croatia) in April 1941. They will tell you that only Serbia was occupied and that the German Nazis exterminated Serbia’s Jews!

Yet as a matter of historical fact, Serbia’s Milan Nedic government had with all its might implemented the Holocaust and made sure that by June 1942 Serbia was one of the first countries in Europe to become “Judenfrei” (Clean-of-Jews/ Jew-Free). Croatia or rather its Ante Pavelic government at the time never pursued a “Judenfrei” status, even if it was, as most countries in one form or another, guilty of racial laws that saw many perish or be ostracised, but overwhelmingly less than what Yugoslav communists with Serbs have been fabricating since 1945, and overwhelmingly less than what “Jedenfrei” status required. Not that such reality justifies any victims of WWII racial laws, but it certainly places into perspective the intrinsic need of Serbia to hide its miserable WWII truth by pointing fingers at others, including Croatia, in order to throw attention away from itself. In that, Serbia and communist Yugoslavia, not only set themselves on the path for blaming Croatia for the WWII Holocaust within Yugoslavia’s borders but also fabricated to the unimaginable the numbers of Serbs allegedly killed by Croats in that war together with the Jews.

On 25 January 2018, in its relentless propaganda pursuits of hiding its own WWII “Judenfrei” state, Serbia opened at the UN building in New York an exhibition called “Jasenovac – The Right To Forget.”

In January 2021 it released a Serbian state-funded movie “Dara of Jasenovac” and it has the audacity to even submit the movie as a nomination for 2021 Oscars! It did not, for example, produce a movie by a name such as “Hannah from Cannon Sheds” (Topovske Šupe concentration camp at outskirts of Belgrade). Of course it did not, if it did it would have to produce a film about the extermination of Jews in Serbia and not pair Serbs as victims alongside the Jews as it is doing in the movie “Dara of Jasenovac”.

Here below are excerpts from the article “Dara of Jasenovac Review: A Holocaust Movie With Questionable Intentions” written by Jay Weissberg and published by the renowned Variety Magazine portal on 25 January 2021:

Isn’t it long past time that there was an honest discussion about why there are so many Holocaust films? Unquestionably some meet the challenge posed by the injunction “never forget” but too many others exist because the market has proven that the Holocaust sells. The movies falling into this latter category trivialize and they sensationalize, fiddling on heart strings with a facile bow whose chords jump between lurid and saccharine. A subset within this group folds more troubling objectives into their cynical understanding of the market, using the Shoah to push agendas that have little to do with comprehending the unfathomable.

It’s a testament to the cravenness of the Holocaust industry that an undisguised piece of Serbian nationalist propaganda like Peter (Predrag) Antonijević’s “Dara of Jasenovac” dressed up in concentration camp clothing, can find distribution outside its native land. Less surprising is that it’s been submitted for Oscar consideration…

The makers of “Dara of Jasenovac” emphasize that the screenplay comes from witness testimony, using that tried-and-true statement to shield themselves from criticism: It happened; therefore we are above reproach. The problems with the film however are twofold: Its unconcealed anti-Croatian, anti-Catholic nativism is badly designed as incendiary fodder for current rifts between Serbia and its neighbors, while its delight in visualizing the sadism, contrasted with childhood innocence, pushes aside any reflection on the dagers of nationalism, murderous racism and genocide, replacing them with cheap sensation and sentiment…

Were there no contemporary context to “Dara of Jasenovac,” it would be just another unmodulated Holocaust drama using violence in the same way as any number of serial killer movies. But background is inescapable, and in this case, Serbian nationalists’ use of Jasenovac as a rallying cry for Serb victimhood through the centuries turns the film into propaganda. Scholar Jovan Byford has cogently detailed how linking Serbian suffering to the Shoah has long been a play to garner international sympathy and legitimize territorial expansion together with racist policies, and that’s exactly what “Dara” plays into. In addition, situating the Ilić family’s home in Mirkovci is tossing red meat to the anti-Croatian brigades given that the town remains a bitter site of contention after the genocidal breakup of Yugoslavia. A Holocaust movie designed to stoke animosity against Germany today would be roundly condemned; to not recognize the same problems here is wilful blindness…”.